On Friday 24 May 2013,  ‘Mongolian script: from metal type to digital font‘ will be presented at the SHARE#3 conference in Brussels.

SHARE (Step-change for Higher Arts Research and Education) is an international networking project, comprising 39 partners working together on enhancing the ‘3rd cycle’ of arts research and education, creating a Europe-wide exchange framework for the widely different experiences, practices and ideas that make up the lively domain of artistic and cultural research.

SHARE brings together arts graduate schools, arts research centres, arts educators, supervisors, researchers and cultural practitioners. It also acts as a network of networks including participation from large networks such as ELIA (European League of Institutes of the Arts) and smaller networks such as EARN (European Art Research Network) and EUFRAD (European Forum for Research Degrees in Art and Design) to name only some of the many networks active in European arts research.

SHARE is co-funded by the EU through the Education, Audiovisual and Culture Executive Agency through the ERASMUS Lifelong Learning Programme.

After outlining the objectives of the research project the talk will shed a light on how the material of the various international locations was collected, managed and processed during the research period.

It was a pleasant surprise to see the celebratory greetings I had sent to the Khumuun Bichig newspaper were published in their edition of 18 May 2012.

and translated freely into English, reads as follows:

Today marks the twentieth anniversary of Khumuun Bichig, the Mongolian newspaper from the Montsame Mongolian National News Agency in Ulaanbaatar.

From the first day of its publication, on 10 May 1992, the four pages of Khumuun Bichig were set entirely in the Mongolian script and distributed throughout the country. In 2010, Khumuun Bichig‘s circulation reached 127 535 copies.

Over the past twenty years Khumuun Bichig was restyled a couple of times, but remained to be an invaluable historical and educational document that continued to support Mongolian writing and calligraphy by collaborating with renowned calligraphers and Mongolian script educators, by reporting on various events and publications about Mongolian writing, and by organizing annual calligraphy competitions. It became an indirect teaching resource by providing a learning environment to anyone interested in the Mongolian script.

On 22 August 2011, I had the privilege to visit the offices of Khumuun Bichig in Ulaanbaatar and to interview Altantsetseg Sampil, director and editor-in-chief of the newspaper. Miss Sampil showed several original copies of Khumuun Bichig from various periods, illustrating the different formats and layouts of the publication. She also introduced me to Bayarbat Khandmaa and Elbeg Andarzara, the two current editors and typesetter-designers of the contemporary digital edition. The entire interview was audio-recorded and a detailed paper on the meeting and history of Khumuun Bichig is being prepared.

At present, Khumuun Bichig is the only newspaper in Mongolia that is typeset and printed in the Mongolian script, whereas the other national newspapers are all set in Cyrillic.

It is hoped that with the President’s support for the Mongolian script, the readership of Khumuun Bichig will only increase, and that this newspaper continues to be the leading newspaper in and on Mongolian writing. 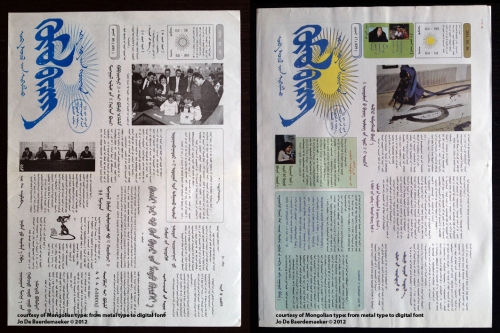 On Tuesday 8 May, an update on the progress of this research project on Mongolian typefaces and new unreleased material will be presented at la Semaine de la Mongolie in Paris.

From 7 until 13 May, the thirteenth district of Paris is celebrating Mongolian culture in all its aspects. The symposium, which focuses on ‘Mongolian Space and Heritage’ is organized by OTASIE and includes several exhibitions, workshops, colloquiums,  lecture panels, discussion forums, film screenings and concerts. My talk will start on 8 May at 11:00 am in Les Voûtes, 19 rue des Frigos, Paris.

The entire program-brochure can be downloaded or consulted at otasie.org  More information can be requested at info@otasie.org or found at www.otasie.org